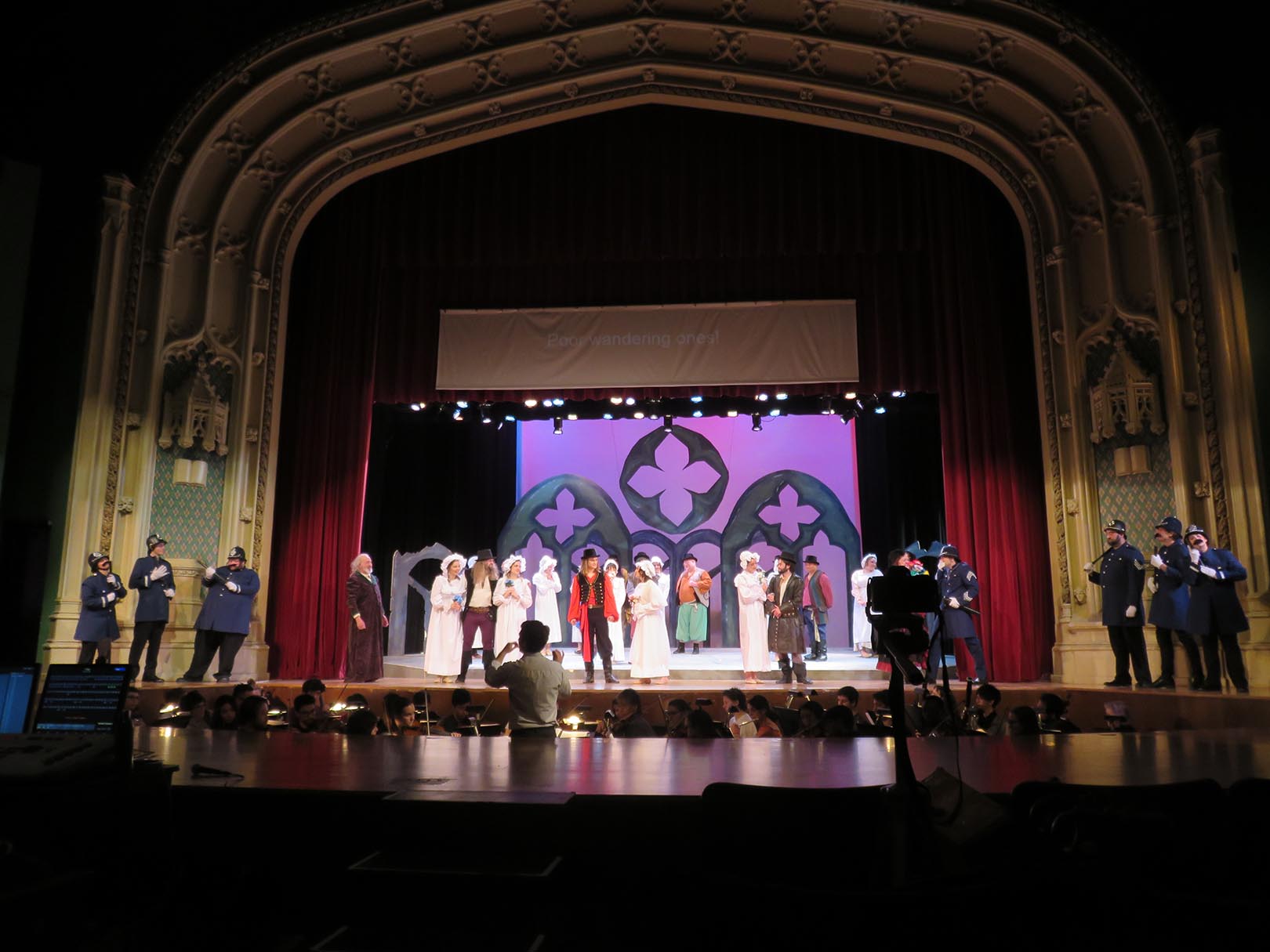 Join us for pirates of penzance 2021

Replacement auditions for principal and chorus roles will be conducted by video submission. Submissions are currently open and will be accepted until 11:00 pm CT, November 14, 2021.

Should you have any trouble, please send an email to
auditions@gilbertandsullivanoperacompany.org
with any questions.

Callback auditions will be conducted by invitation only on Saturday, November 20, 2021, on the University of Chicago campus in Hyde Park.

Modest stipend for chorus and all roles.

Rehearsals are held in Hyde Park, near the University of Chicago campus close to the CTA #6 bus & Metra Electric; street parking is available.

In general, principals are called Monday and Wednesday evenings, and the full cast is called Tuesday and Thursday evenings, Sunday afternoons, and every other Saturday. (Subject to change.)

Proof of vaccination can be provided:

• Digitally, using either a photo of the vaccination card or test result or by logging into a verification app used for events or travel (such as Clear to Go, CrowdPass, Verifly, EU Pass, My Bindle, etc.).

• Proof of vaccination or COVID test must be in English.

Mabel (soprano)
Dauntless in her courage and almost cloying in her sweetness, Mabel irritates her less-comely and more conservative sisters. She captivates the men around her, earning the love of Frederic, the favoritism of her father, and the immediate loyalty of the policemen. Mabel primarily communicates through song and must be able to convey a variety of emotions through complex vocal trills and runs. No dancing required.

Major General Stanley (comic baritone)*
Prissy, proper, and persnickety, the deliciously quirky Major General is the personification of the Gilbert and Sullivan operetta for much of the American theatergoing public. A practiced comedic actor and patter veteran who can bring his own characterization and oddities to the role is essential. No dancing required.
*This role has already been cast. Understudy auditions will still be held.

Pirate King (bass-baritone)*
The Pirate King does not have a regal bone in his body. He is, however, a force of nature—a bundle of bull-in-a-china-shop energy who demands to be the center of attention at all times, if not by sheer force of personality then through loudness and threats of violence. He is not measured, careful, or subtle, and he offers little in the way of planning, strategy, or subtext. Equal parts confident and accident-prone, he has the mind of a boisterous golden retriever puppy in the body of Errol Flynn. An excellent physical comedian is required in this role.
*This role has already been cast. Understudy auditions will still be held.

Ruth (contralto)*
Initially a doting matron, Ruth ultimately reveals herself to be a bold, funny, and enthusiastic leader of the pirate band. A confident and dynamic comic actress is required in the role. Moderate stage movement is also required.  Ruth may sing some with the men while on stage (particularly in the more complex musical numbers), so a true contralto is ideal in this role.
*This role has already been cast. Understudy auditions will still be held.

Sergeant of Police (bass-baritone)*
A bundle of nerves and anxiety or, alternatively, an expressionless, monotonous dial-tone. Which of these two extremes makes up the essence of the Sergeant will depend on the performer. Heavy stage movement required—ideally the Sergeant will have some sort of distinctive physical ability, such as notable flexibility or gymnastic skill.
*This role has already been cast. Understudy auditions will still be held.

Frederic (tenor)
Honest and dutiful to a fault, Frederic is smart, brave, and skilled—making him far too qualified to be a member of the titular band of pirates. Despite his skill and intelligence, Frederic is young, innocent, and painfully naive, yet he has a boyish sex appeal that captivates the women around him. The role of Frederic has more stage time than any other G&S role, and requires a performer with excellent physical and vocal stamina. Light-to-moderate movement required.

Edith (mezzo-soprano)
A bossy, nosy, know-it-all, Edith is the oldest and the unquestioned leader of her adoptive siblings. Though risk-averse and proper, she secretly loves the adventure and disorder caused by the pirates, though she outwardly offers them nothing but scorn. A soprano or high mezzo will be cast in this role. Edith sings with the women’s chorus.

Kate (mezzo-soprano)
The most intelligent and conservative of her adoptive siblings, Kate is second-oldest and defers only to Edith in the filial chain of command. Kate has the soul of a repressed librarian. She is smart and responsible bordering on humorless, but sparks to life with the excitement and chaos brought by the pirates. Kate sings with the women’s chorus.

Samuel (baritone)*
Unfailingly enthusiastic and energetic, Samuel is the first mate of the Pirate crew, which means he is responsible for cheering on the King’s every move. Samuel is a bottomless pit of positive energy; as a colleague he’d grow tiresome within minutes, but as a character he’s nothing if not endearing. Samuel sings with the Pirate chorus, but not the Police chorus.
*This role has already been cast. Understudy auditions will still be held.

Isabel (cameo)
Though speaking in only a single scene, Isabel has the potential to be a show-stealing role as the wide-eyed ditz of the sisters with comedic physical bits sprinkled throughout the show. Isabel sings with the women’s chorus.

Women’s Chorus
These are Major General Stanley’s wards. Awkward, gangly, whimsical, and dramatic, the women are too stuck in their Victorian ways to allow themselves to enjoy the adventure of the pirates—but they enjoy it all the same. The female chorus in Pirates is one of the silliest, most energetic, and most fun choruses in all of operetta.

Men’s Chorus
Pirates! They aren’t real pirates. They’ve never really been in a fight and aren’t necessarily sure what a pirate does, exactly. Rather, they’re well-bred noblemen who grabbed what looked vaguely “piratical” in their closets and set out to act as piratical as they can without having to get their hands dirty. This is the most fun chorus in which to perform in the entire G&S canon. The men also double as the Chorus of Police, at least partially, and will be responsible for all of the vocals for the Police, either on- or off-stage.

Chorus of Police
These are stiff, cowardly, limber, hilariously incompetent Keystone Cops. As originally conceived, the entire men’s chorus doubles as the policemen’s chorus in the opening of Act II. In the second half, the lower-voiced men remain as police while the higher-voiced men make up the Pirate chorus. In this production, the Chorus of Police will be made up of the men’s chorus but augmented in places by women with dancing ability.

to submit an application

Additional Questions
If you have additional questions, please contact the production team:
auditions@gilbertandsullivanoperacompany.org