The Secrets of H.M.S. Pinafore 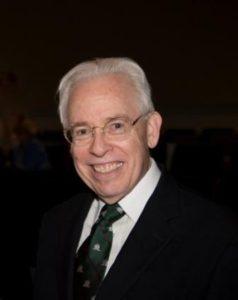 On March 6, 2014, Prof. Ralph MacPhail, Jr., Professor emeritus of Theatre, Bridgewater College of Virginia, presented a lecture at the University of Chicago on The Secrets of H.M.S. Pinafore. During the course of a lively lecture, interspersed by three songs from the production, and well received by a hearty crowd of community and University members, “secrets were shared”:

*Annotated with University of Chicago Library Call Numbers for copies in its Regenstein and Mansueto Library collections.

Ralph MacPhail, Jr., is Professor emeritus of Theatre, Bridgewater College of Virginia, where he taught and directed for 33 years. Still residing in Bridgewater “in retirement,” he serves as Artistic Director of the Gilbert & Sullivan Austin, and keeps an active schedule of speaking on, writing about, and directing the Savoy operas. An avid collector of anything related to G&S, he also enjoys corresponding with fellow Savoyards.

Department of Music, Nicholson Center for British Studies, and Theatre and Performing Studies at the University of Chicago; and the David Currie Memorial Fund of the Gilbert & Sullivan Opera Company.